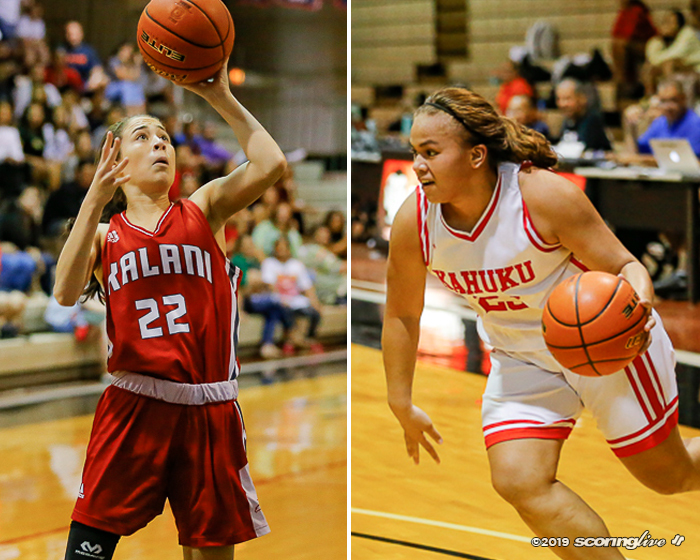 ALIAMANU — For Kamalu Kamakawiwoole, it is not how many she scores, but when.

The senior shot an uncharacteristic 1 for 13 from the field, but that one came with five minutes, 13 seconds left as part of an 8-0 run to help No. 6 Kalani rally past No. 10 Mililani, 38-34, Tuesday to advance to Thursday's Oahu Interscholastic Association Division I championship against No. 5 Kahuku in an all-Eastern Division matchup.

Kahuku defeated Kaiser, 55-37, in the other semifinal at Radford's Jim Alegre Gymnasium.

The defending OIA champion Falcons (12-1) will try to avenge a 51-48 regular-season loss to the Red Raiders on Dec. 18. They will be seeking their third overall league crown when they play Kahuku, which is looking for its first title since 2005, the last time it reached the title game. The Red Raiders are looking for their seventh title.

"It feels great to make it this far," Kahuku coach Latoya Wily said. "We're one game away. It's just rewarding as a coach to see your players' hard work continues to play along. We set a team goal and we go one more game to accomplish that goal."

The Falcons rallied from a 32-28 deficit by opening the fourth quarter with an 8-0 run to turn back the Trojans, the West's top seed.

Kamakawiwoole, who entered the game averaging 19 points per game, did not make her first field goal until 5:13 in the fourth quarter that snapped a 32-all game. She later converted both ends of a one-and-one with 30 seconds left to make it a two-possession game to keep the Trojans at bay.

"It was frustrating," Kamakawiwoole said of uncharacteristic shooting. "It's just a game. I have to tell myself, mentally, it's OK, just forget about it and score again."

Kalani coach Chi Mok was not surprised her season-leading scorer would not fail the team.

"She's a winner," Mok said. "She's going to do whatever it takes to win, whether she's scoring 30, or grabbing rebounds for us, or hitting those free throws at the end, wanting the ball at the end."

The Falcons did not have to rely on Kamakawiwoole for scoring, as Alayna Akiona and Kaluna Halaunajan tied for the team lead with 12 points each.

No Trojan finished in double-digit scoring; Kalena Gibson led her team with 9 points.

What doomed the Trojans during the Falcons' 8-0 run were seven turnovers that accounted for four points.

Three players tallied double-digit scoring for the Eastern Division champion Red Raiders (13-0) over the Cougars (8-3) in the other semifinal.

Turnovers doomed the Cougars from the start. In all, Kaiser allowed 17 points off of turnovers.

The Cougars cashed in on two turnovers before the half to pull to within 17-15. But Kahuku opened the third period with a 13-0 run, scoring eight after turnovers.

"We just keep reminding our girls what on what their responsibilities are our there," Wily said. "They know they have to put the work in on  the floor."