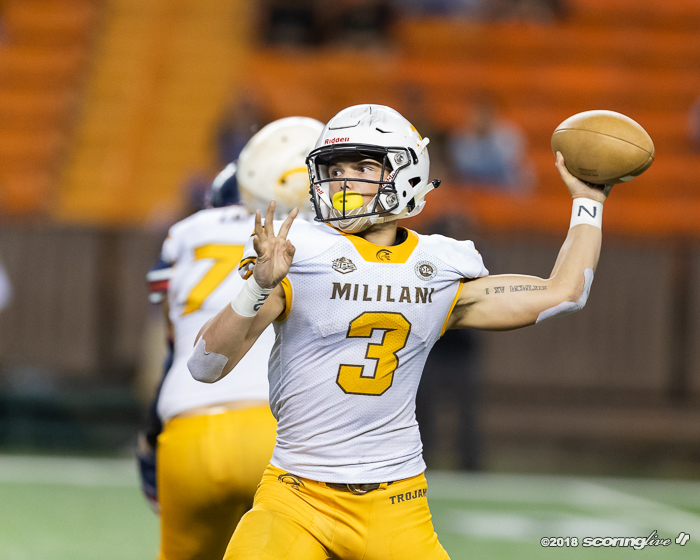 MILILANI — Dillon Gabriel, the state's all-time leader in passing yards, signed his National Letter of Intent to attend the University of Central Florida in a small ceremony at the Mililani High School library Wednesday afternoon.

The Mililani senior announced his decision while surrounded by his family and friends. Gabriel, a 6-foot, 190-pound quarterback, chose the Knights over the University of Southern California and Georgia. He opened up his recruiting last month after previously giving a verbal commitment to Army.

Gabriel said that he made his final decision two days prior.

"I made the decision on Monday. Like I said, it was very tough, you know, a lot of thinking, but when it came down to it, it fit me," Gabriel said. "I have some family down there as well, so overall UCF is the place I want to be."

"I think it's just a unique community. It reminds me a lot of like home and that's probably the reason I want to be there. Shoot, I loved the visit, it was genuine people, the coaching will develop me and I think on the academic side, I'll definitely get a good education," he said.

Mililani QB Dillon Gabriel signs his NLI with UCF in a small ceremony at the Mililani High School library this afternoon. Gabriel, the state's all-time leader in passing yards, chose the Golden Knights over USC and Georgia. @scoringlive pic.twitter.com/mW8zOslX29

Another familiarity for Gabriel will be the Knights' high-powered, no huddle offense — much like the one he ran for the Trojans the past three years.

"Definitely. The scheme, you know, is the same. It fits me and when I got to sit down and talk about the offense, a lot of things translate," Gabriel said. "I think the transition will be a lot easier for me in terms of learning the offense. A lot of concepts are the same, so I think for me it'll work for me."

Dillon Gabriel is about to announce his signing: pic.twitter.com/wthbjEK8kC

Gabriel said that when USC hired former Texas Tech coach Kliff Kingsbury as its new offensive coordinator recently, it did have an impact on his recruitment, but not enough to pick the Trojans over UCF.

"It did. Like I said, I went through all three. Really, it was a hard decision. I looked at all three and all of them are great schools, I think, and it's just that this was the best fit for me," Gabriel said.

Included among the list of proteges that Kingsbury has worked with at various coaching stops are Heisman Trophy winner Johnny Manziel and Kansas City Chiefs quarterback Patrick Mahomes, who leads the NFL in passing yards and passing touchdowns this season.

Gabriel, who will graduate from high school a semester early and enroll at UCF next month, completed 56.7 percent of his passes for 3,754 yards with 38 touchdowns against 13 interceptions this season. He led the Trojans to a 10-3 overall record, an Oahu Interscholastic Association Open Division championship and a 38-17 loss against top-ranked Saint Louis in the state title game last month.

Earlier in the day, Gabriel's high school teammate, Darius Muasau, signed with the University of the Hawaii. The 6-foot-1, 225-pound Muasau was a first team All-OIA linebacker the past two seasons.