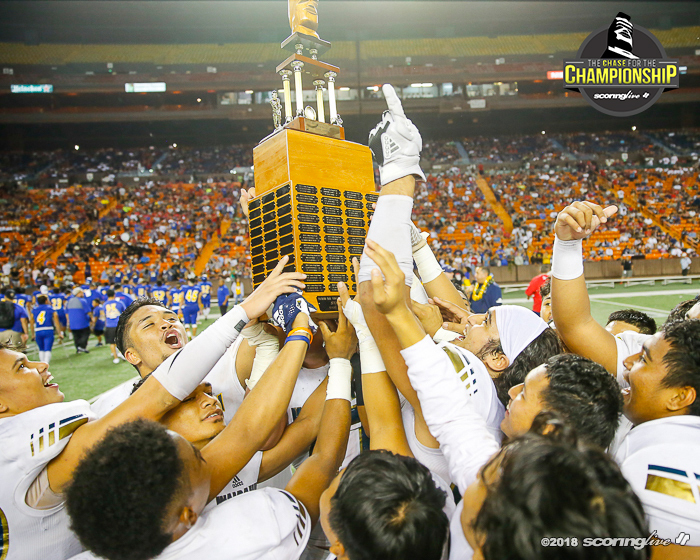 Waipahu, who was in Division II last year, saw its share of adversity this season. The Marauders missed some key players during stretches and lost two games by an average of 27 points. The team righted the ship in mid-October and finished the season on a five-game winning streak that included avenging a loss to Iolani in the state semis.

In the end, it was worth it.

"It's amazing. I think the lows needed to happen. For every setback there was a comeback and we came back very strong after the Kailua game and our kids responded. Our kids didn't look back and what was, but they learned from what was happening in the middle of the season," Waipahu coach Bryson Carvalho said.

The Marauders (10-4 overall) piled up 366 yards of net offense with 165 passing yards and 201 rushing yards and for a team that averaged 26.3 points, it was their second 42-point performance of the season.

Their stingy defense registered 11 total sacks and held the Vikings to a season-low minus-35 net rushing yards and 178 yards of offense — their second lowest output of the season.

"On film, it wasn't a shock. We knew they were going to be a big physical line we would have to play. You have to be prepared for it and have to execute," Hilo coach Kaeo Drummondo said of Waipahu's defense.

"Defense as a whole, we woke up the last few weeks," Carvalho said. "We rely on the big guys up front. I'm proud of the effort they put in the past two weeks."

"It felt great, I'm speechless right now. We all came together and it was a great team win," Camanse said.

"It started with the front four and I loved how our defense came together tonight," Waipahu safety Deacon Kapea said.

Waipahu scored on their opening series with a eight play, 72-yard drive. The Marauders converted a fourth-and-5 with Marques' 6-yard pass to Branson Jay Reyes that set up a 29-yard touchdown pass from Marques to Matt Fiesta.

"We needed to keep the momentum and we kept going and had them on their heels," Marques said of the quick start.

The Marauders defense forced Hilo to punt and Marques converted another fourth down with a 14-yard scamper. Two plays later, Marques pitched it back to Failauga, who threw a 15-yard touchdown to a wide open Saxon Tote for a 14-0 lead. It was Failauga's first passing touchdown of the season and it worked despite being a last-minute add in.

"We were going to add a few trick plays. When the play was going on, the corner bit on me and Saxon was wide open for the touchdown," Failauga said of the trick play.

"The trick play was play 12 on the script. We knew we wanted to make sure we score at least halfway through the script and one more time and it worked out perfectly for us to put up 14 points," Carvalho said.

Hilo responded three plays later as Kyan Miyasato threw it over the top to Kalae Akui for 63 yards as the Vikings trailed, 14-7.

"It might've been a choice route call. Just looking at the matchup and seeing how the corner is playing and you pick your route," Drummondo said of the play.

"They were probably were going to go over our corners and in hindsight we probably should've gave some more cushion to help out our kids," Carvalho said.

Marques threw his second touchdown pass of the night as he found Reyes up the middle for 15 yards following a 41-yard completion to Tote for a 21-7 lead. He threw for 150 yards on 8-of-15 passing with two touchdowns and two picks in the first half.

"The picks can give momentum to the other team, but I trusted my defense and it didn't faze me," Marques said.

Hilo gave the ball back to the Marauders 27 seconds later as Kapea intercepted Miyasato and returned it 38 yards to make it 28-7, and it was a momentum shifter.

"When you score on defense or special teams, that impacts the game greatly," Drummondo said.

The Vikings opened up the second half with an 11-play drive and encroachment penalties on the Marauders extended the drive and Miyasato found Kyler Aguiar on a 4-yard slant route for a touchdown. Aguiar also hauled in a 80-yard touchdown pass from Miyasato and finished the game with eight catches for 129 yards.

Miyasato finished with 213 passing yards, three touchdowns and one pick but was hounded all night and was dropped for minus-66 rushing yards.

The Waipahu football team sings their Alma mater after winning the Division I state title. pic.twitter.com/RxrU28E438

Failauga carried the ball seven times on an 11-play drive and punched in a 2-yard score in the second half and finished with 151 rushing yards on 21 attempts.

Jayven Reyes carried the ball eight times for 41 yards and rushed for an 11-yard touchdown early in the fourth quarter.

Kalen White recorded a game-high 11 tackles, one for a loss, and an interception to lead the Vikings, and Kayden Alameda had seven tackles, two were for losses, and Kahiau Walker had the other pick to go along with three tackles.

Hilo (9-2 overall) went on a nine-game winning streak and along the way defeated Maui, 35-24, in the state semifinals. The Vikings' two losses came on Oahu to Campbell in the season opener and Waipahu to close the 2018 season.

"It's disappointing to lose this way. The kids, even during adverse situations continued to compete with pride and class. At the end of the day when you do that, you can walk off the field with your head held up high," Drummondo said.