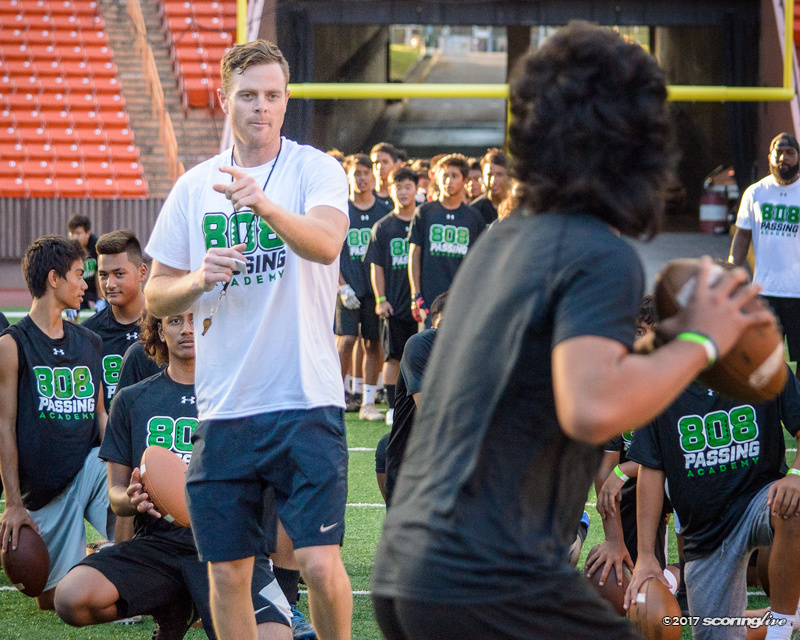 HALAWA — It's been three and a half years since Sean Schroeder stepped onto the turf of Hawaiian Tel Federal Credit Union Field at Aloha Stadium — or "Hawaiian Airlines Field" as it was named back then.

The Duke University transfer quarterback ended his Rainbow Warrior career slinging the ball for 322 yards with three touchdowns through the air and one more on the ground in a 49-42 win over Army back on Nov. 30, 2013.

Nowadays, the lefty spends his time in Orange County, California as a senior analyst at Pacific Alternative Asset Management Company, but plans to go back to school to earn a Master of Business Administration in what would be his third degree after earning a bachelor's in political science at Duke and a master's in human resource management at the University of Hawaii at Manoa.

In the meantime, Schroeder returned to Aloha Stadium on Friday afternoon as the founder of 808 Passing Academy, a nonprofit hoping to assist current Hawaii high school quarterbacks and receivers in the pursuit of a college education.

The second annual camp dubbed "2017 Under the Lights" was open to the first 150 athletes who signed up with costs of attendance being absolutely free.

"I noticed coming here there wasn't really a lot of camps for the high schoolers, and growing up on the mainland there's all these camps all around," Schroeder said. "You start seeing the high price of camps and extrapolate that further of the local kids having to fly over there and get a hotel and then pay for the high price camps. It's a tough deal. So we want to bring the camps to them and it's a way for all the former UH guys and the community to get together and have a blast with it."

Friday afternoon's activities ran two and a half hours with a combination of drills and competitions both with and against each other and the coaches.

"It's a stressful process and they just got to trust in it and know that they have guys who believe in them and are willing to help them along this journey," Schroeder said, who never saw the field at Duke but became the Rainbow Warriors' starter in 2012 and had to re-earn the job a year later. "A lot of us just played a couple years ago so we're somewhat peers and really know the process and hopefully we can impart that knowledge on them.

"It's easier said than done. Being at their age, you don't really know what to expect," Schroeder continued. "What I can say being through the highs and the lows of playing this game is stay grounded. Find that support system and trust in the process. I think that's a valuable lesson."

Last year's inaugural camp was held on the University of Hawaii's Manoa campus at the Clarence T.C. Ching Athletics Complex, but due to new NCAA rules restricting the use of FBS facilities, the camp was moved to Aloha Stadium.

"Hopefully we continue to build off momentum and we get some partners to come in and help us financially," Schroeder said, who had help from PAAMCO and several individual donors to help foot the bill for insurance, rental and operational costs. "We can make it a multi-day event. We want to make this a yearly tradition. One thing we want to make it constant is keep it probably free of charge and give these kids an opportunity to compete and learn the game."